Happy 80th Anniversary Xerography: The Invention of the Xerox Copier 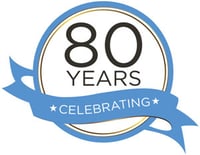 When you walk up to your printer today to make a copy, wish it a happy anniversary. Today celebrates 80 years since the invention the original “xerox” process—xerography.

On October 22, 1938 this revolutionary copying method was created in a small makeshift lab in Queens, NY by a patent attorney named Chester Carlson, who was looking for a more efficient replacement for carbon paper.

It took Carlson another 10 years to find a company that would develop his invention into a useful product. It was the Haloid Company, a small photo-paper maker in Rochester, N.Y, which took on the challenge and would eventually grow to become the giant multinational company now known to the world as Xerox.

Haloid took a risk by investing in this groundbreaking technology and Xerox has never since shied away from innovation, with over $1 Billion dollars invested in R&D annually today.

Xerox’s Palo Alto Research Center (PARC) has also made some very notable innovations. In the 1970’s also invented Ethernet, the foundation for today's Internet and graphical user interface (GUI) and bitmapped display, the world’s first personal computer to use a mouse.

From Carbon Paper to Electrophotography to Xerography

Xerography, the technology which started the office copying revolution, was born on October 22, 1938, the inspiration of a man interested in graphic arts, chemistry and physics, working in his spare time on a passion project.

As a teenager, Carlson got a job working for a local printer, from whom he acquired, in return for his labor, a small printing press about to be discarded. He used the press to publish a little magazine for amateur chemists.

"I don't think I printed two issues, and they weren't much. However, this experience did impress me with the difficulty of getting words into hard copy, and this, in turn, started me thinking about duplicating processes. I started a little inventor's notebook, and I would jot down ideas from time to time."

Upon graduating from high school, Carlson worked his way through a nearby junior college where he majored in chemistry. He then entered California Institute of Technology, and graduated in two years with a degree in physics.

His first job was as a research engineer at Bell Telephone Laboratories in New York City. But as the Depression deepened in the 1930’s, he was laid off at Bell, worked briefly for a patent attorney, and then secured a position with the electronics firm of PR. Mallory & Co. While there, he studied law at night, earning a law degree from New York Law School.

As he worked at his job, Carlson noted that there never seemed to be enough carbon copies of patent specifications, and there seemed to be no quick or practical way of getting more. The choices were limited to sending for expensive photo copies, or having the documents retyped and then reread for errors.

What if offices had a device that would accept a document and make copies of it in seconds?

Carlson turned to the little-known field of photoconductivity and electrostatic images. He began some rudimentary experiments in his apartment kitchen, calling the process “electrophotography”.

"I knew that I had a very big idea by the tail, but could I tame it?"

So he set out to reduce his theory to practice, dipping into his meager resources to pursue his research. He set up a small lab in a nearby rented room and hired an unemployed young physicist, Otto Kornei, to help with the lab work.

Carlson recalls the day they made electrophotography a reality:

"I went to the lab that day and Otto had a freshly-prepared sulfur coating on a zinc plate. We tried to see what we could do toward making a visible image. Otto took a glass microscope slide and printed on it in India ink the notation '10-22-38 ASTORIA.' We pulled down the shade to make the room as dark as possible, then he rubbed the sulfur surface vigorously with a handkerchief to apply an electrostatic charge, laid the slide on the surface and placed the combination under a bright incandescent lamp for a few seconds. The slide was then removed and lycopodium powder was sprinkled on the sulfur surface. By gently blowing on the surface, all the loose powder was removed and there was left on the surface a near-perfect duplicate in powder of the notation which had been printed on the glass slide.”

They went to lunch to celebrate. 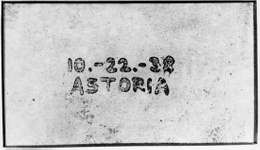 The first electrophotographic image ever copied.

Truth be told, Carlson's first apparatus never worked well but he knew it was too promising to give up on. 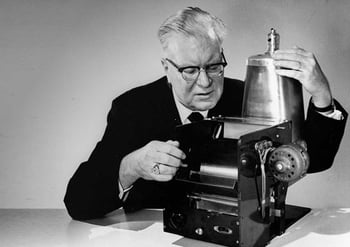 Carlson and one of the early xerography prototypes.

He pounded the pavement for years in a fruitless search for a company that would develop his invention into a useful product. From 1939 to 1944, he was turned down by more than twenty companies. Even the National Inventors Council dismissed his work. Finally, researchers at Battelle Memorial Institute and Haloid Company would see its enormous potential and apply the resources needed to turn the basic discovery into functional, and ultimately profitable, machines.

The parties also agreed that "electrophotography," the word Carlson coined, was too cumbersome. So Battelle, based in Columbus, Ohio went to an Ohio State University classical language professor, who coined "xerography," from the Greek words for "dry" and "writing."

The Copier Hits the Market

It was not until 1959, twenty-one years after Carlson invented xerography, that the first convenient office copier using xerography was unveiled. The 914 copier could make copies quickly at the touch of a button on plain paper.

It was a phenomenal success.

Even in the 1960s, when the 914 and successor products were spelling glory for Xerox, Carlson remained in the background preferring anonymity and he gave his opinion only when asked. Despite his invention making him a multi-millionaire, he chose to remain living modestly, giving away an estimated $100 million to various foundations and charities by the time of his death in 1968.

In Carlson's last years he was also given dozens of honors for his pioneering work, including the Inventor of the Year in 1964 and the Horatio Alger Award in 1966.

In 1965, at the commemoration of the 175th anniversary of the U.S. patent system, he gave some of his original equipment, as well as that first xerographic print, to the Smithsonian Institution, where it is still on display.

In short, the 914 was an astounding success, one of the most successful single products ever made. It launched a major corporation and revolutionized an industry. In 1961, Haloid Xerox took the name of Xerox, and its stock was listed on the New York Stock Exchange. The rest is history...

The evolution of Xerox.

Our Relationship with Xerox

We're a Xerox Company. That means you get the best of both worlds. Our local decision making, service and support backed by a global technology powerhouse.

In 1999, Global Imaging Systems (GIS), a leader in office technology solutions, acquired Lewan Technology as its core company in the Rocky Mountain region. In 2007, GIS was acquired by Xerox, a strategic move designed to drive incremental market share through channel distribution, enhance the end-user customer experience, and fuel growth.

for your Xerox printers and a full breadth of other business IT solutions from Document Management to Cyber Security and Cloud.

Allie is Lewan's marketing director and blog manager. She keeps blog readers updated on the latest news, events, and achievements for the organization.