Interest in Software Defined Networking (SDN) continues to grow through the ability to make networks more programmable, flexible and agile. This is accomplished by accelerating application deployment and management, simplifying automating network operations and creating a more responsive IT model.

Cisco is extending its leadership in SDN and Data Center Automation solutions with the announcement today of Cisco Virtual Topology System (VTS), which improves IT automation and optimizes cloud networks across the entire Nexus switching portfolio. Cisco VTS focuses on the management and automation ofVXLAN-based overlay networks, a critical foundation for both enterprise private clouds and service providers. The announcement of the VTS overlay management system follows on Cisco’s announcement earlier this year supporting the EVPN VXLAN standard, which underlies the VTS solution.

Cisco VTS extends the Cisco SDN strategy and portfolio, which includes Cisco Application Centric Infrastructure (ACI), as well Cisco’s programmable NX-OS platforms, to a broader market and for additional use cases, which includes our massive installed base of Nexus 2000-7000 products, and to customers whose primary SDN challenge is in the automation, management and ongoing optimization of their virtual overlay infrastructure. With support for the EVPN VXLAN standard, VTS furthers Cisco’s commitment to open SDN standards, and increases interoperability in heterogeneous switching environments, with third-party controllers, and with cloud automation tools that sit on top of the open northbound API’s of the VTS controller. 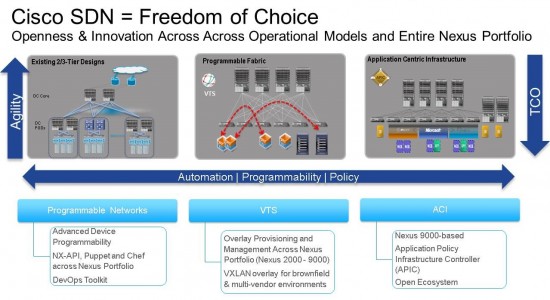 Cisco is committed to delivering this degree of interoperability and integration with multi-vendor ecosystems for all of its SDN architectures, as we have previously exhibited with ACI, with the contributions we have made on Group Based Policies (GBP) to open source communities, and with our own Open SDN Controllerbased on Open Daylight. With VTS, we now offer the broadest range of SDN approaches across the broadest range of platforms and the broadest ecosystem of partners in the industry.

Programmable Networks: With Nexus and NX-OS Programmability across the entire portfolio, we deliver value to customers deploying a DevOps model for automating network configuration and management. These customers are able to leverage the same toolsets (such as existing Linux utilities) to manage their compute and networks in a consistent operational model. We continue to modernize the Nexus operating system and enhance the existing NX-APIs by adding secure SDK with native Linux packaging support, additional OpenFlow support and delivering an object driven programming model. This enables speed and efficiency when programming the network while also securely deploying 3rd party applications for enhanced monitoring and visibility such as Splunk, Nagios and tcollector natively on the network.

Programmable Fabrics: Overlay networks provide the foundation for scalable multi-tenant cloud networks. VXLAN, developed by Cisco along with other virtualization platform vendors, has emerged as the most widely-adopted multi-vendor overlay technology. In order to advance this technology further, a scalable and standards-based control plane mechanism such as BGP EVPN is required. Using BGP EVPN as a control-plane protocol for VXLAN optimizes forwarding and eliminates the need for inefficient flood-and-learn approaches while improving scale. It also facilitates large scale deployments of overlay networks by removing complexity, fosters higher interoperability through open standard control plane solutions, and access to a wider range of cloud management platforms.

Application Centric Policy: Cisco will be able to offer the most complete solution on the Nexus 9000 series whether it is ACI policy-based automation or BGP EVPN-based overlay management. Customers will now have a choice for running an EVPN VXLAN controller in a traditional Nexus 9000 “standalone” mode, or to leverage ACI and the APIC controller with the full ACI application policy model, and integrated overlay and physical network visibility, telemetry and health scores. VTS will support EVPN VXLAN technology across a range of topologies (spine-leaf, three-tier aggregation, full mesh) with the full Nexus portfolio, as well as interoperate with a wide range of Top of Rack (ToR) switches and WAN equipment.

The Cisco Virtual Topology System (VTS) is an cloud/overlay SDN solution that provides Layer 2 and Layer 3 connectivity to tenant, router and service VMs. Cisco VTS is designed to address the multi-tenant connectivity requirements of virtualized hosts, as well as bare metal servers. VTS is comprised of the Virtual Topology Controller (VTC), the centralized management and control system, and the Virtual Topology Forwarder (VTF), the host-side virtual networking component and VXLAN tunnel endpoint. Together they implement the controller and forwarding functionality in an SDN context.

The Cisco VTS solution is designed to be hypervisor agnostic. Cisco VTS supports both VMware ESXihypervisor and KVM on RedHat Linux. VTS will support integration with OpenStack and VMware vCenter for integration with other data center and cloud infrastructure automation. VTS also integrates with Cisco Prime Data Center Networking Manager (DCNM) for underlay management. The Cisco VTC, the VTS controller component, will provide a REST-based Northbound API for integration into other systems.

Cisco VTS will be available in August. 2015

Source of Blog post was from Gary Kinghorn @ http://blogs.cisco.com/datacenter/vts